This past week Ethereum has seen substantial growth, but what is driving this bullish behaviour?

Ether is now available at all SatoshiPoint ATMs

Find your nearest ATM today and begin trading with SatoshiPoint.

This past week Ethereum has seen substantial growth, but what is driving this bullish behaviour?
[addtoany]

Ethereum price hits a new all time high of $460. Ether (ETH), the cryptocurrency used in the Ethereum’s blockchain, has arrived at new records after crossing the $460 price level. In the last 24 hours, the currency has seen a 9 percent increase according to CoinMarketCap.

Ethereum has had an incredible year. Since the beginning of the year until now, Ether has appreciated around 5,000 percent. That means that it has grown five times more than Bitcoin just this year.

In order to achieve this spectacular increase the currency has appreciated more than 17 percent in less than 12 hours. Since the beginning of November, ETH has been growing at a healthy rate and now it seems to be in a bullish market. The MACD Index shows that the market is in an overbought situation that could be stabilized in the middle-term.

Ethereum’s market capitalization has also increased after friday’s growth. At the moment it arrives at $43 billion dollars. That means that, at present, Ethereum accounts for more than 16 percent market value. Bitcoin keeps being the leader with 53 percent of the cryptocurrency market cap.

The majority of the transaction volume is concentrated in the Ethereum’s blockchain. In the last 24 hours, this platform has registered more than 50 percent of all the cryptocurrency transactions. 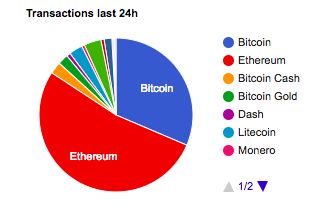 – The markets have reacted.

Main Reasons Behind this Price Surge

One of the main reasons behind this bullish market could be the new code released named Casper. The Casper upgrade is intended to rework blocks creation and the propagation on the Ethereum’s network. According to Casper’s white paper, published some days ago, the intention is to reduce the complexity of the blockchain.

On Wednesday, the first Ethereum bond was released by JPMorgan, Moody’s and Blockchain startup Nivaura. This bond was created for a UK-based company LuxDeco. Something similar recently happened with Bitcoin. The famous cryptocurrency will be available to be traded on the CME’s futures platform. This news is likely to push Ethereum’s price up.

Another reason of the increase in its price is the fact that Ethereum mining is getting easier. On October 16th, Ethereum mining difficulty dropped to levels not seen since August 2017. This situation will certainly give incentive to miners to keep working and not to give up.

Some weeks ago, the Ethereum community suffered a big hack. Parity, Ethereum’s exclusive, and second most popular, client had been hacked compromising 500,000 ETH. The company tweeted publicly about the situation.

Even after this situation, the markets reacted positively towards Ethereum. Since this moment, ETH has grown a further 64 percent. This shows how resilient the Ethereum community is and how prepared they are in order to face challenging situations.

During this year, Bitcoin has seen a decrease in its market capitalization. Other currencies are growing in strength and more investors are starting to  be aware of other currencies different from Bitcoin. This year Ethereum has proven itself to be one of the favourites for cryptocurrency traders and investors. Its high trading volume, strong community and future potential has attracted lots of interested individuals and venture capitalists.

Check out the video below to learn more about the Ethereum network from creator, Vitalik Buterin.

Call us old fashioned but we don’t think it’s right to bother you with popups and paywalls. Help us spread the word about our blog and what we’re doing at SatoshiSolutions by subscribing and sharing below.

Mt.Gox Controversy
April 3, 2018
Go to Top
This site requires anonymous cookies and various 3rd-party services to function properly. To continue using SatoshiSolutions.io you must give consent.